You may ask what’s a social event between groups of (mostly) women got to do with football? My heart sank a little when I heard a third hand comment from someone in football about our project: “I’ve heard a group of the wives got together and did some cooking.”

I don’t write that to mock the person saying it, but how would they know the anything about the impact of our event? It was the inferred assumption that the women would be the ‘other half’ of a football fan that disheartened me; the work continues.

So, what’s it got to do with football?

In fact, it was actual football supporters who got together, they happened to be women, and yes cooking was involved!

The Lady Imps Supporters Association was founded to provide a space for women to share their love of Lincoln City and to encourage more women to the game.

We love the fact that people, regardless of their gender, join us and support of our aims.

Through the Fans for Diversity Campaign we connected with the Bangla Bantams of Bradford City.

The clubs share a poignant history; the Bradford fire disaster of 1985 which claimed the lives of 56 football supporters. In grief and sadness fans respect the shared history and continue to remember those who never came back from their beloved match day.

Neither of these supporter groups existed then – but members of both groups and communities do remember that day. You may think the perceived differences between the groups couldn’t be wider.

One the one hand we had ladies with origins in Bangladesh, some practicing Muslims, some wearing a hijab, some not speaking very much English. And on the other ladies from a rural typical small English cathedral city, most with white British backgrounds, some with no religion. 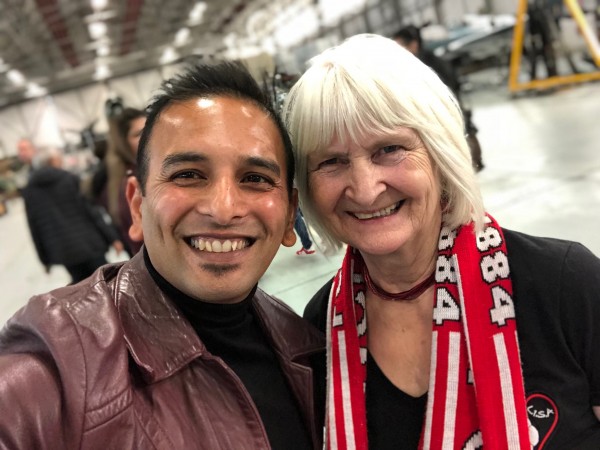 What was there in common? Well, football, for a start.

Both groups promote the positives of football. It’s a shared experience to build on, we just took it further.

Together we cooked pakoras, toured our clubs, paid our respects, formed friendships. Thanks to the Royal Air Force we also enjoyed a close-up with the Red Arrows and the Battle of Britain Memorial Flight; the roots of LCFC’s awesome 617 Squadron!

While this isn’t about discussing the finer technical points of the game or swapping in depth knowledge of our teams over the past four decades is it about the power football has and the vehicle it can be to build bridges between communities. The experience has no doubt changed perceptions and maybe even challenged fears. Without football we’d never have met. Some testimonies from the women involved can be found below.

We were apprehensive about going to Lincoln, but it was amazing, looking back it was the highlight of 2018 for our group. It didn’t feel different – the warmth we have when we meet was the same when we met the L.I.S.A group. If they come to Bradford we will cook for them.

Suzy, from the Lady Imps said;

I didn’t know what to expect but I was very excited. I met lovely ladies, genuinely interested in my way of life as much as I was in theirs. I learnt a lot about their culture; we spoke about schools, hobbies and of course football. Having a tour round the ground was brilliant, good company, scrumptious food and laughs! Football certainly can build bridges in positive ways!

Julie, from the Lady Imps said:

Another heart-warming, brilliant day. Keep it going guys, you cannot bottle that feeling, it is made by special people with the best intentions, and I hope we can make it spread far and wide. As for the whole experience, it probably wasn’t as ground breaking for me as I used to be part of a Muslim family, so I already know what lovely people they are. Personally, it was more about making new friends and being able to show kindness, hold out the hand of friendship, and give people the confidence to go out and mix with different people, that there are lovely people in all walks of life, it just takes one of you to reach out. Love the Bangla Bantams, cannot wait to see them again!

Lucy from the Lady Imps said:

The whole experience from 1st meeting with Bangla Bantams has been 1 of the best of my life. Making amazing new friends along the way. I truly felt like I belonged to a whole new family. Sorry if that sounds a bit gushy. But true bonds have been made.

Thanks to LISA and the Bangla Bantams for the images used in this blog.

Fans across Europe to take stance against Super League

Supporters from across the Europe will be voting to back the FSA’s position against the formation of a European Super League this weekend.

Led by Football Supporters Europe (FSE), of which the FSA is a member, fan groups across the continent today united to condemn plans by a selection of Europe’s biggest clubs to form a breakaway European Super League.