Wolverhampton Wanderers have become the latest club to explore standing accommodation following the installation of a standing area at Molineux.

This week the Midlands club unveiled a small section of rail seats, grandstand-style seating and seats with barriers in an unused section of the Billy Wright Stand to demonstrate how they work to their local Safety Advisory Group and Fans’ Parliament.

Wolves’s managing director Laura Dalrymple said: “As a club we are keen to be at the forefront of innovation and progression, so the opportunity to install these examples of potential safe-standing solutions was one that we were very happy to explore.

“Whilst the seats themselves will not be operational or used at matches, we are now able to give our Fan’s Parliament group and local authority the opportunity to view all the options before some of these solutions become commonplace in UK stadiums.

“We are now actively working on plans regarding the development and expansion of Molineux in line with the club’s ambitions on and off the pitch, and we see this as another example of how we plan to meet supporters’ expectations and desires as we deliver a stadium that meets all of our requirements.” 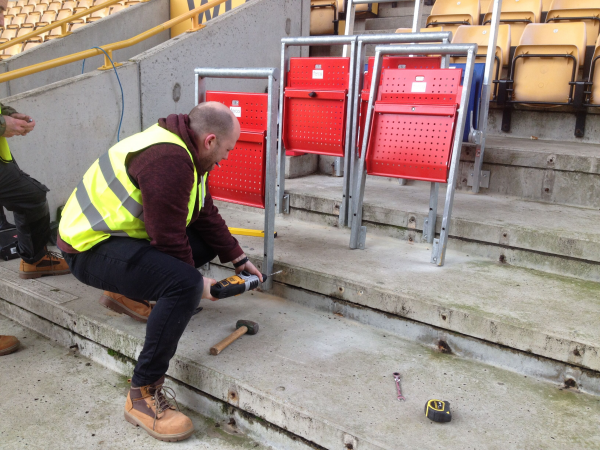 Wolves are the second Premier League team to install seats with standing barriers in their ground, following on from Tottenham Hotspur who have included a large section of the technology at the new White Hart Lane.

Changes included in the latest Green Guide mean rail seats and seats with barriers can be licensed. Meanwhile, the Government’s review into the all-seater legislation is close to being complete and is likely to be published within the coming months.

The FSF’s standing campaign co-ordinator Peter Daykin said: “The reality is a huge number of supporters want to stand at the match – Wolves should be congratulated for exploring future standing options and looking to provide their fans with real choice.

“This represents yet more progress in the standing campaign as we eagerly await the outcome of the Government’s review.”

Thanks to PA Images and Jon Darch for the images used in this article.

Wolves fans have opted to convert their two decade old fans’ parliament into a supporters’ trust – a move they say will give them a greater say on the club’s critical issues.