The FSA’s structure features a democratically-elected National Council which embeds within it fan representatives from clubs at Premier League, Championship, League One and League Two, and National Game (non-league) level.

Community-owned clubs elect their own representatives as do members of our Women’s network.

Each of these networks are entitled to three elected representatives, with the responsibility with the networks to fill the positions.

Six individual fans are also elected and, in addition to this, associate organisations have their own representatives as does the Fans for Diversity network.

These fan representatives are selected by their own Networks which meet four times per season. All networks are entitled to three elected representatives, with the responsibility with those networks to fill the positions. Networks can set their own campaign priorities.

Individual members are entitled to attend the Network meetings along with associate and affiliate members. If your supporter group would like to find out more about FSA Networks please email [email protected] (subject header “Network meetings”) and we’ll pass your email onto the relevant network manager.

The Network representatives attend FSA National Council meetings which also includes the FSA chair and vice chair who are elected at our Annual General Meeting. 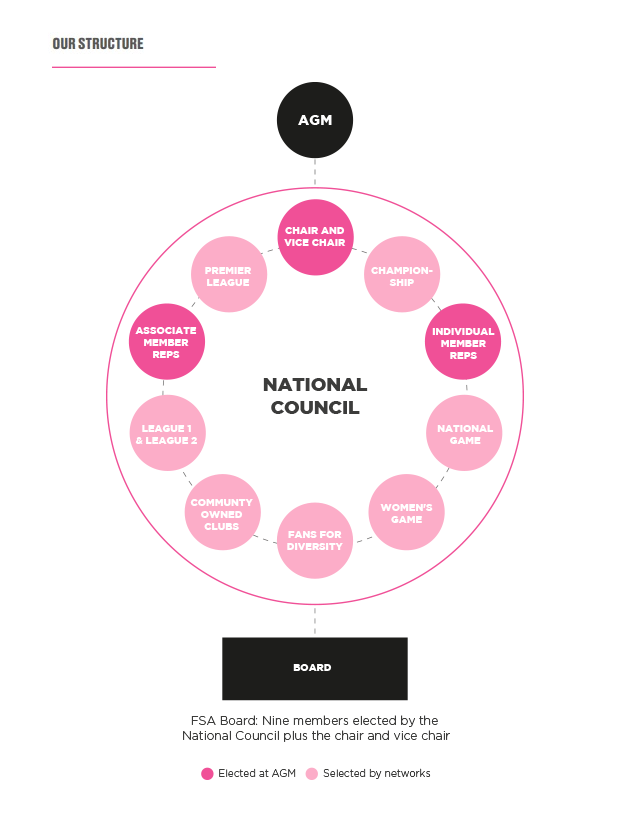 Today Liverpool have unveiled their new supporters board and the creation of a “legally-binding commitment to strategic-level supporter engagement” – a first in the Premier League.

It’s been hard not to notice the explosion of cryptocurrency deals across football, as club execs and commercial departments chase football’s latest gold rush.

Fan representatives from the EFL’s three divisions met with the competition’s senior officials in June to discuss ongoing issues across the leagues.

Scunthorpe United has announced the appointment of a fan-elected director following a vote involving the Iron’s supporter groups. Neil Wright, chair of the club’s London and South East Supporters Club, will represent supporters’ groups at board level.