Premier League and EFL clubs are mandated by their respective leagues to meet with fans twice per season, at a minimum, and no issue should be “off-the-table”. The Department for Digital, Culture, Media and Sport (DCMS) guidelines are in place and the leagues have incorporated versions of these into their rulebooks – you can see those rules here.

What is supporter engagement and why do it?

Supporter engagement is a means of giving fans a sense of being closer to the club. A close association encourages and strengthens loyalty. It is a term that has come to encompass everything a club does to communicate with its supporters and everyone seems to have their own definition.

Much club-driven fan engagement has been aimed at more “consumer-focused” issues such as the matchday experience rather than issues of governance, strategic planning or ownership. However, it should be much more than consumer consultation. If the right individuals are involved, and a relationship built on trust created, it can be of assistance in the strategy and success of the club.

Supporter engagement has evolved naturally in recent years, often led by progressive supporter groups and/or clubs. As a result, although there are some common formats, elements of them can also differ significantly.

While a club might have its own bespoke approach, being open to external ideas is also part of the engagement process. Engagement can occur at a number of levels, with each level offering varying amounts of value to the club and community.

The Best Practice Pyramid (below) illustrates the various levels of involvement supporters can have within their respective clubs. In theory, the optimum solution for ensuring supporters have a direct input into their club’s governance is supporter ownership, where supporters have a minimum of 50+1% shareholding in the club. 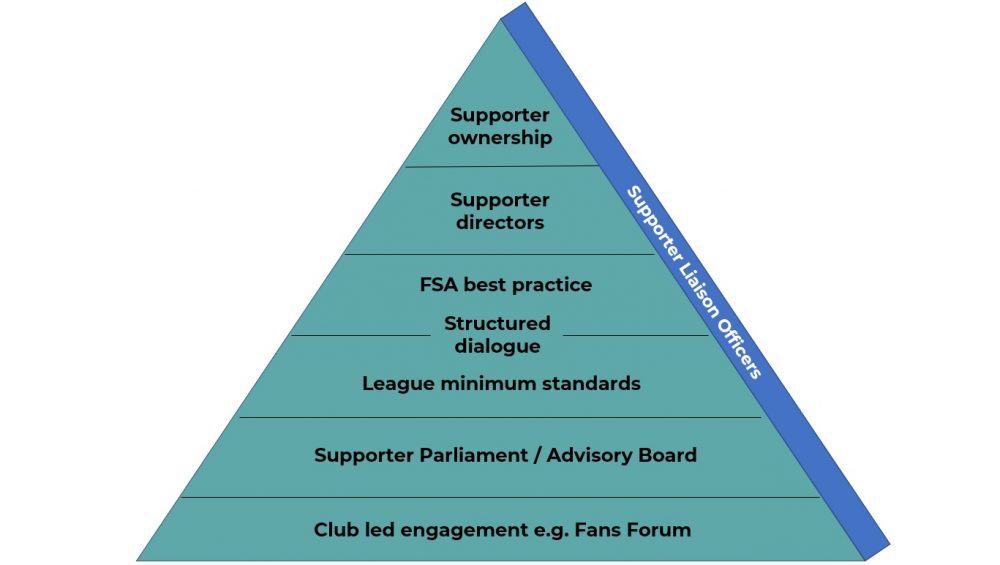 The Best Practice Pyramid – All clubs should utilise the bottom three tiers, and work towards tier four: “FSA best practice”. Supporter Liaison Officers should work across all tiers.

Fans then have certain powers to elect representatives and hold them to account, as those representatives can be unseated from the Board or decision-making body. However, supporter ownership is not always possible, and where that is the case clubs and supporters should strive to achieve and participate in all other levels.

This not only creates a fan base who feel positive about their club, it also provides valuable supporter feedback for the business side of the club.

With supporter involvement evolving significantly over the past two decades, it is important to identify the different mechanisms of engagement and what is driving them: increasing numbers of supporter-owned clubs, fan representatives, the introduction of roles such as the Supporter Liaison Officer and structured dialogue.

Supporters have never had a better chance to raise their voice and ensure they are heard on critical issues related to the running and ownership of their clubs.

Scunthorpe United has announced the appointment of a fan-elected director following a vote involving the Iron’s supporter groups. Neil Wright, chair of the club’s London and South East Supporters Club, will represent supporters’ groups at board level.

Fan representatives from the EFL’s three divisions met online with the competition’s senior officials at the end of February to discuss ongoing issues across the leagues.

Preston North End are the latest EFL club to commit to ongoing dialogue with their supporters by signing up to a Memorandum of Understanding (MOU).

Liverpool launch new supporters board – with backing from fans

Liverpool have launched a new supporters board which they say will deliver meaningful fan representation on strategic issues – and the move has been backed by the vast majority of Liverpool fans.