Consular stats for the World Cup in Brazil 2014

Looking after England fans at the World Cup is a complex, multi-agency job involving two Government departments, the FA, UK Football Policing Unit, ACPO, and the FSF. The Foreign Office have just released details of the consular assistance they provided to England fans during the World Cup in Brazil and they explain more of their work below…

It is estimated that 20,000 England fans visited Brazil over the course of the tournament. Official ticket sales through the UK were the fourth highest, behind Brazil, the United States and Argentina. When not following the England team to Manaus, Sao Paulo and Brasilia, many fans enjoyed themselves in Rio de Janeiro, where the England team were also based between matches.

“The vast majority of England fans were GREAT ambassadors for the country and the number requiring assistance was low. The Be on the Ball campaign helped fans prepare and we will look to do something similar for the Olympics,” says Alex Ellis, Her Majesty’s Ambassador in Brazil. The majority of the 22 arrests were for ticket touting. 75 Emergency Travel Documents were issued to fans whose passports were lost or stolen. 11 hospitalisations were mostly for minor injuries.

Consular teams were available 24/7 throughout the tournament to assist those who did need our help. This included a mobile team sent to each city where England played, working alongside the Football Supporters’ Federation and six UK police officers. A dedicated World Cup Consular Helpline also operated 24/7.

World Cup Travel Advice was updated regularly throughout the tournament and received nearly 40,000 individual views since the start, and nearly 80,000 times since the launch in December.

If you have any enquiries for FCO consular staff before you go or while abroad you can now ask questions via the FCO’s new Twitter service @FCOtravel. This service adds to the ways that British people travelling or living overseas can already get in touch with the FCO: on Facebook, by emailing the travel advice team or contacting local consular staff. 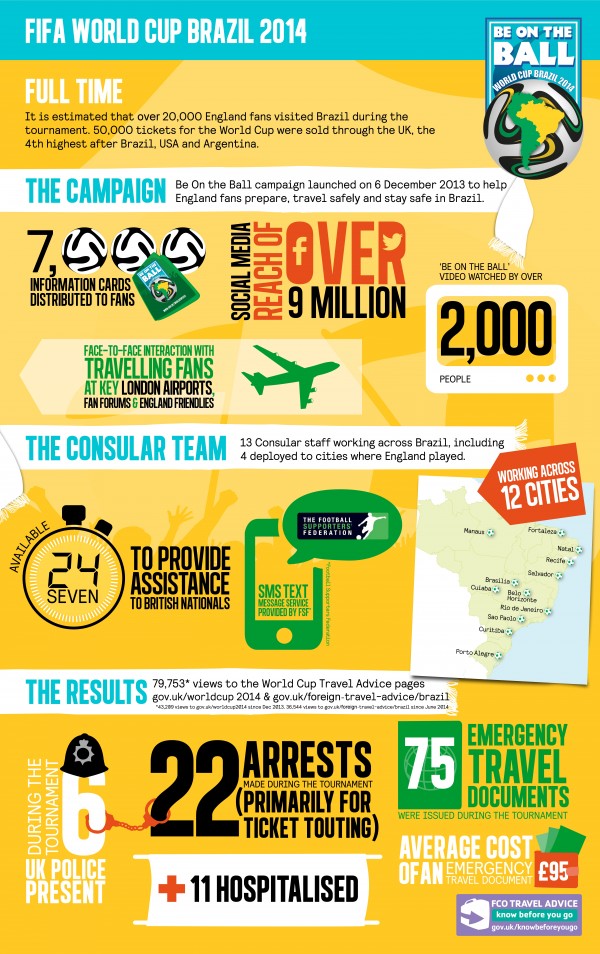 Next month the Free Lionesses fanzine will be running our first fans’ embassy out in France when the Lionesses take on the world at the 2019 FIFA women’s World Cup.

Top tips for fans at the Women’s World Cup

(Above – Lionesses fans in Nice)

The international break is in full swing – England’s women drew 3-3 with Belgium last week, and are now preparing in Norway for tonight’s friendly in Bergen. We caught up with Lionesses fan Louise Smith to find out more about what it’s like following the national team, her experiences of the World Cup and how the Lionesses are inspiring a new generation to get involved in the game.

Liverpool supporters have expressed concerns about Qatar’s labour and human rights record ahead of the club’s trip to the Gulf state in December.