Earlier this week FSF chair Malcolm Clarke joined Duncan Drasdo of Manchester United Supporters’ Trust (MUST) in a meeting with officials from Liverpool City Council regarding away ticket allocations. The council’s licensing committee has the power to drastically reduce the number of tickets available to travelling supporters at Anfield and Goodison Park.

Following Monday’s meeting that does not look likely to happen.

Last season the Red Devils’ allocation at Anfield was cut by more than 1000 because of “migration” and blocking of gangways within the away end although there were very real reasons for this movement. Away fans will now receive a near full allocation and both Clarke and Drasdo praised the council’s willingness to listen and treat supporters as part of the solution, rather than part of the problem. 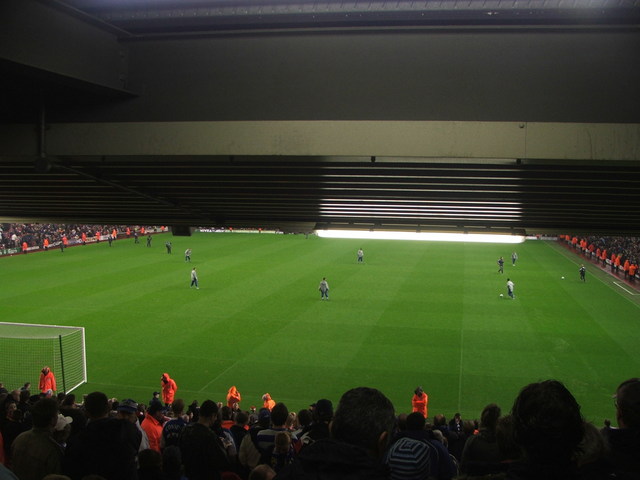 “It was a really positive meeting, the council were very receptive and we hopefully helped shine a light on supporter issues that they might not otherwise have understood. They listened to our argument and were entirely reasonable,” said Drasdo.

“Many of the problems in earlier years stemmed from the fact that you cannot see the pitch from the back two rows of the away end at Anfield if people stand in front of you (see image right, fans are sitting in this shot). It doesn’t even have to be caused by persistent standing either, if your team attacks and people stand then you can’t see. As a result people migrate into the aisles and gangways so they can see the action.”

To counter this the council has recommended that Liverpool FC either leave the back two rows empty or two seats at the end of each row empty. That decision will be at the club’s discretion for the match at Anfield on Sunday 23rd September.

Around 180-200 seats will be lost, an amount both the FSF and MUST recognise as acceptable and necessary to keep aisles, stairwells, and gangways clear. It is essential that fans keep these areas clear – and that any seats deliberately left empty, remain empty – if they wish to maintain the fuller ticket allocation in future seasons.

Around 26 fewer tickets will be made available to Red Devils fans for their trip to Goodison Park. Once again this relates to the blocking of access and exit points in the Upper Bullens Road End. Everton host Manchester United during the Premier League’s opening week on Monday 20th August.

FSF chair Malcolm Clarke said: “The whole tone of the meeting was fantastically positive and we appreciate them letting us attend. Not only did they invite us but they actually listened to what we had to say and came up with a sensible proposal. They see supporters as part of the solution, not part of the problem, and the reductions look likely to be quite small.”

Manchester United fans who wish to keep up-to-date on news surrounding ticket allocations should keep a close eye on Redsaway. Site editor Dale Haslam has covered this issue at length, with great tenacity, and was instrumental in this process. He is a great advocate of total transparency from councils and clubs on this issue.

A report released by the Sports Ground Safety Authority today shows that standing options – such as rail seats and seats with barriers – have improved safety in the top flight.

Earlier this month the elected supporter representatives on the FSA’s National Council (NC) met to discuss the organisation’s ongoing work.

Ahead of the formation of a unified national supporters organisation, we’re seeking nominations for its new representative body.