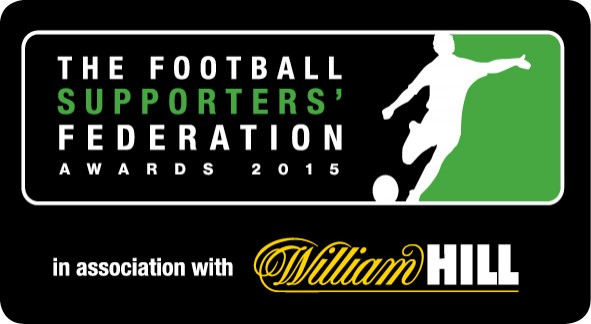 The Football Supporters’ Federation is delighted to announce the shortlists for the 2015 FSF Awards in association with William Hill.

Can last year’s winner Aguero retain his crown? Or will Jamie Vardy’s stunning run of form be enough to see him win the fans’ vote for ‘Player of the Year’ 2015?

Every Premier League and Football League club must appoint a Supporter Liaison Officer and this category recognises those who have gone that extra mile for their club’s fan base.

“The FSF Awards in association with William Hill give fans the chance to have their say on the best in the game. Which player has lit up the game in the past year? Which writer, pundit or paper adds the most to your understanding of football? Fans are the professional game’s bedrock and we’d like you all to have your say in deciding who gets the nod.”

“The FSF Awards is unique amongst the big football awards because it’s the fans who decide the winners. And we’re delighted to be associated with this celebration of everything good in the game.”

Nominees for FSF Awards 2015 in association with William Hill:

Player of the Year

Away Day of the Year

Commentator of the Year

Fanzine of the Year

Newspaper of the Year

Podcast of the Year

Pundit of the Year

Radio Show of the Year

Supporter Liaison Officer of the Year

Writer of the Year

How are the winners decided?

Four categories (Away Day, Blogger, Fanzine and Supporter Liaison Officer of the Year) will be decided by an FSF panel.

The FSF Awards in association with William Hill take place on the evening of Monday 7th December 2015 at St Pancras Renaissance Hotel (London). Nominees will be invited and a limited number of tickets may go on general sale. Details TBC via www.fsf.org.uk.

Vote now in the FSA Awards in association with BeGambleAware

FSA Awards in association with BeGambleAware

Hello! Forgive us a little introspection but you might have noticed that we have a new name and logo and wondered what that was all about?