Lib Dems: Safe Standing will be in our 2015 manifesto

Such is the groundswell of support for safe standing that good news sometimes comes out of the blue, in this case the announcement that the Liberal Democrats will make safe standing part of their manifesto.

In past years the party had offered to “explore” the idea, but the latest development is an upgrade on that. There’s a firm commitment to change the law to allow safe standing areas should they form a Government or, more likely, Coalition Government in 2015.

Lib Dem Spokesperson for Culture, Media & Sport John Leech MP says, “Football clubs should be allowed to introduce safe standing areas where there is a desire to do so. Safe standing is allowed in many other sports and we do not believe that the top level of football should be an exception.

“We are not calling for a return of the terraces of the 1980s. Modern safe standing areas using ‘rail seating’ operate very successfully in top tier football across Europe.

“Safe standing offers supporters more choice, a better atmosphere and cheaper tickets. It is an idea whose time has come and I am proud that it is the Liberal Democrats are the first political party to commit to delivering this.”

John Leech MP is a long-time backer of safe standing – as you can see from the image of him below, him taken at Bristol City’s demo safe standing area in February 2012 – the law is so tangled that the area can’t be used for football, but can for rugby. 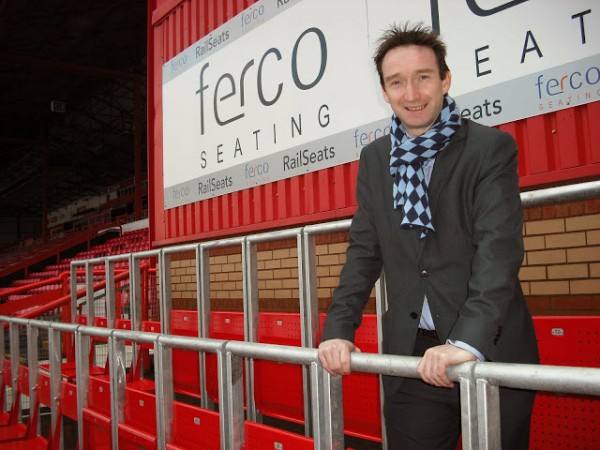 He also signed Roger Godsiff MP’s (Labour) Early Day Motion 573, which called for a safe standing pilot back in 2012. Our supporting Parliamentary event also kept safe standing in the national media spotlight and convinced more clubs to back the fans’ argument.

Only last month Welsh Assembly members penned an open letter to Helen Grant MP, Minister for Sport, calling for a pilot of safe standing. That came after the FSF and the Safe Standing Roadshow visited the Welsh Assembly for an event organised by Andrew RT Davies, Leader of the Welsh Conservatives.

As recently as five or six years ago, safe standing simply wasn’t on football’s agenda. Despite having the consistent support of fans there were no clubs seriously lobbying for it, very few within the game speaking up about it, and certainly no leagues giving safe standing their backing.

Nowadays, we know that around 70% of clubs in the Premier League and Football League openly back a trial, with many supportive voices within the game, and even the Football League backing a trial.

Those steps were made by winning over clubs one-by-one, until there was a weight of opinion that simply couldn’t be ignored. If you don’t build that support, it’s far too easy for Chief Execs and Chairman at the top of the PL, FL, or FA structure to ignore your voice.

That’s the strategy the Safe Standing Campaign has taken in political terms too – by winning over influential MPs, AMs, and political advisers to the cause, it gives more legitimacy to our case when lobbying Government Ministers and senior civil servants.

With an election round the corner, and votes to be won, the time is ripe for fans to let their MPs know just how big an issue this is for fans…

In a little over four weeks millions of football fans will head out to cast their vote in December’s General Election – and the main political parties will be publishing manifestos including policies which could affect football.

Does your MP back The Fans’ Manifesto?

Next month many millions of football fans will head out to cast their vote in the General Election. But who’ll win your cross in the box?

Eleven demands for radical change to the game have been put together in one ‘Reclaim the Game’ manifesto by Football Supporters Europe to help supporters campaign across the continent.