Amid a blitz of publicity the police’s World Cup operation to stop hooligans travelling to South Africa was launched. But did it all stack up? Now the World Cup has ended The FSF’s Michael Brunskill reports on a cosy relationship between the media and police that means everyone’s a winner. Except the fans.

Most reports back in June followed the exact same lines. Something a little like, “Police crackdown on hooligans travelling to South Africa for World Cup.”  If it’s a tabloid they’ll also throw in a few choice words like “amok” and “yobs”. The tabloids love dangerous words like that, words that no one uses in real life.

Our pioneering journalist will then point out fans were taken to court and prevented from travelling – hooligans crushed by the heel of justice. If it’s an especially well-funded TV station or newspaper, one that can afford to send a reporter to the airport, it’ll finish with a quote from a fan. “I think it’s fine, if you’ve got nothing to hide you’ve got nothing to fear. No one wants hooligans at the World Cup,” says Terry Supporter of Anywhere, England.

It’s all totally compliant reporting by the media, a spoon-fed story from police press officer to media with no-one questioning a thing. And because the media never question a thing the “facts” are generally swallowed by the public, especially those who never go to games and don’t get football.

As the numbers show, it just doesn’t stack up. Of the 3,000 plus fans that have banning orders in England and Wales how many received them for violence or disorder while following England? Five. Read the media reports and you’d be forgiven for thinking it was hundreds, if not thousands. Yet the overwhelming majority of those with banning orders have absolutely no intention of travelling to South Africa – the idea of police at the border catching hundreds of thugs is a tabloid myth.

According to the last lot of the Home Office’s available figures from 2007/08 and 2008/09 not one fan of England or Wales breached their order by following either nation away from home. Yet the BBC, Sky, Metro and ITN (to name but a few) saw fit to go big on this story. Why? I’ve yet to see one which claims a fan with a banning order was actually caught at an airport heading for the World Cup.

The reports make allusions to arrests but none of these are for fans with current banning orders trying to board flights. The arrests written about fall into two categories – those who the cops have stopped at airports on “intelligence” and those who have failed to hand in passports. 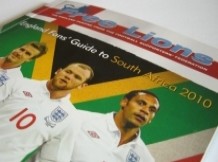 Now if the police are genuinely preventing people flying who have been convicted of violent offences and given banning orders by a court of law, fine, there’s no problem. But that’s not the case. We know of one fan who was pulled out of line and hauled to court only for the judge to throw the police’s case out and award £1,000 compensation to pay for a new flight to South Africa! What a waste of time and taxpayers’ money.

Even if the coppers do have intelligence on supporters why not use it weeks ago? Imagine if it was you. Tickets, flights, accommodation, time off work and arrangements with friends or relatives all down the pan, and you have no real time to prepare any kind of defence.

We’re meant to be a democracy not a police state yet the Football Disorder Act 2000 allows police to forcibly detain you at the airport and it can all be done on one officer’s say-so. You’ll never been given the opportunity to defend yourself in front of a jury either as it’s a matter for the civil courts.

There was also a lot of press around those with banning orders not handing passports in. But the assumption that someone with a banning order who fails to surrender their passport is a hooligan looking to travel doesn’t ring true either. Dr Geoff Pearson’s research at the University of Liverpool shows when fans with banning orders don’t hand in passports it’s usually because they don’t have one. Hardly candidates for a trip half-way around the world then?

Plenty will argue that the end justifies the means but these stories play on the stereotype of a football fan from 10 years ago. English fans have been extremely well behaved in recent tournaments, it’s gone full circle from authorities ignoring us and telling us not to travel to nations actively welcoming us and working with the Nationwide FSF Fans’ Embassy (right) to make sure everyone has the best time possible.

The stories do absolutely no favours for the vast majority of law-abiding football fans as the general public and foreign media (many of whom speak English and look to these shores for tales) pick up scare stories and naturally assume we have a major hooligan problem when we simply don’t. This then translates into needlessly excessive policing and stewarding of football fans, home and abroad.

So the police get more resources, the media get an easy story, and the public’s thirst for scare stories is quenched. Everyone’s a winner, except the football fan of course. But then again we’re hooligans, we get what we deserve. Did you not see the news?

This article is an extended version of a piece which featured on the When Saturday Comes website by Michael Brunskill.

Thanks to Ben Terret for the image reproduced under CC license.