Sit Down, Shut Up!

Michael Brunskill shares his thoughts on the FSF’s inaugural Question Time-style event Sit Down, Shut Up (Thursday March 4th). With the FSF receiving complaints about policing and stewarding on an almost daily basis from across the divisions he asks – can fans convince the authorities to police with consent, rather than cause dissent?

It’s a dark night in London and hundreds of rival fans have arranged a “meet” in an East End back lane. No doubt there’ll differences of, erm, opinion and the coppers are expected to be in attendance. They’ve heard about this one on the grapevine. If Danny Dyer was on hand he’d no doubt be predicting that this could get a little bit naughty…

Then again Danny Dyer, bless him, is a bit of a gullible git and the aforementioned “meet” is a public meeting for the FSF’s inaugural Question Time-style Sit Down, Shut Up: Are Football Supporters Discriminated Against? Coppers have shown up, because the FSF invited them along, and any jousting will be of the verbal variety only – there’ll be no fisticuffs here. The only firms in attendance are firms of solicitors.

See how easy it is to revert to stereotypes though? Even with poor Danny Dyer.

As Henry Porter himself put it the panel “was bombarded by incisive and coherent questions from the floor, as well as many accounts of supporters suffering from disproportionate and unjust punishment and being treated contemptuously by police and stewards.”

Hats off and much respect to Roger Evans and Nick Hawkins for giving us their time and fielding questions – especially as there was an obvious split in the panel’s views and the audience swiftly decided who they sided with. And it wasn’t the CPS or police. Now nobody likes being the ‘bad guy’ but they answered everything in an open and honest manner, even if at times the audience disagreed.

It’s this type of dialogue that’s needed from both sides if things are to change for the better – we sincerely hope Roger and Nick came away with a better understanding of fans’ experience and feelings.

Football fans are genuinely sick of being treated in a contemptuous fashion by authorities who, blatantly, just do not get us and prefer to treat everyone as a potential hooligan. It’s the way that legislation applies to football fans but no other group in society.

Cardiff City fan Paul Russell was first to pick up on this when he drew the issue of so-called ‘bubble matches’ to the panel’s attention. Bubble matches are games where ALL away fans must travel on designated transport from a specific pick up point and no independent travel is allowed and tickets are handed out en route. They’re often used for matches police designate as high-risk, such as Blackburn-Burnley.

They’re ultra-restrictive and we know Liberty don’t look too kindly upon them either – we’d love to see them challenged in the courts. 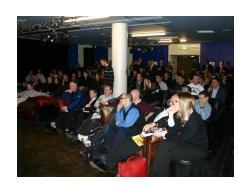 There are plenty more examples, of course. We’re not allowed to drink on coaches travelling to games, stand in our own stadiums, or drink within view of the pitch. Try any of those at a football game and you’re liable to end up with a criminal record yet in other circumstances – pop concerts or rugby league matches – they’re perfectly fine.

Another bugbear from the audience was the welcoming committee for away fans from the local police – you know the type. Frog marched into town to be met by barking police dogs and cameras shoved in your face. Why is this necessary? How much antagonism does it cause and what happens to the video?

“If you’ve nothing to hide, you’ve nothing to fear,” argued the panel’s Nick Hawkins, a suggestion that was largely met with incredulity. If that was the case no one would have curtains in their living room window. What would the police’s reaction be if thousands suddenly start filming them on their camera phones? We presume they’d have no complaints? Of course not. More likely you’d be locked up under Section 44 of the Terrorism Act.

That’s before you even get into stadiums with bouncers (stewards) given wide-ranging powers by private companies (clubs) to haul you off their property (ground) if they see fit. And how long before a bunch of steward gets so over-excited they end up in a ruck with the players? Oh, it’s already happened between West Brom stewards and Reading players.

Now football fans are a cynical bunch at the best of times because, unless you happen to support a club who actually wins something now and again you have to be. I can almost hear people asking “why should I care how other people are treated?” You keep your nose clean, right? That’s exactly the point.

The overwhelming majority who get in touch with us to complain about unfair stewarding or policing are ordinary, law-abiding fans. The police, and sections of the media, might spin you the myth that the only fans arrested are drunk, aggressive, Stone Island wearing clichés but listen to those who deal with this day in, day out and they’ll tell you a different story.

“Everyone gets told it’s a small minority but the unspoken thing is that all of you MIGHT be. That’s the reality of how it feels,” said Sarah Ricca a solicitor at the fan-friendly firm Deighton Guedalla. “It’s instructive what happens when things go wrong. It’s the Jean Charles de Menezes thing and bad intelligence at the start causes this.

“Let’s assume police officers are absolutely genuine and they assume people are a problem and corral fans into a small space – those same fans then get angry because they’re being forced into a small space. Police with the wrong intelligence then wrongly interpret that anger, they’re not thinking ‘here’s a group of people who’ve been wrongly interpreted as football hooligans’ they’re thinking ‘they’re a bunch of hooligans, look at them shouting.’”

You can see the picture that Sarah paints and the inevitable conclusion.

“They then up the ante in terms of force and a situation is made very dangerous that never needed to be dangerous at all! The more power you give to the police, the more opportunity they have to abuse that power.” Sarah regularly defends fans in court and knows what she’s talking about when it comes to how the law targets football fans.

It’s the group of Stoke City fans who stopped off in a pub on the way to Old Trafford for a pint only to be served with Section 27 orders preventing them from watching their team and allowing police to forcibly transport them across the country. It’s the Liverpool fan charged with a Section 5 Public Order Offence for the heinous crime of chanting “Yanks Out!” It’s the three Sunderland fans hospitalised by police, one with serious baton injuries to the head, while the local press instinctively sided with the police branding fans “yobs” running “amok in Newcastle’s Central Station.”

Where’s the balance? How many fans are injured, victimised or prosecuted that we never hear about? Experience tells us supporters are routinely ignored by the authorities and media because of unjust and outdated stereotypes.

Find yourself on the wrong end of this and not only will you feel the full weight of the law on you but you better not expect any support from your club either. Chances are you’re going to be banned for years, even for the most minor of offences, as the burden of proof for Football Banning Orders (FBOs) is spectacularly low.

FBOs were initially introduced to deal with violent hooligans, and these are people that no one wants at the game, least of all the FSF.

Nowadays though, regardless of the offence you’ve been arrested for, in our experience the police and CPS will push for an FBO and the ban is three years. That’s every ground in the country and sometimes even the railway network on matchdays. Oh, and regardless of whether you give two hoots about England or Wales you’ll have to surrender your passport for up to 30 days per year.

This could be for an offence that, away from football, might only get you a caution. In fact, the laws are so restrictive around our national sport. It might not even be illegal away from the match. Away from criminal law too the burden of proof is far, far lower in the world of football prosecutions. FBOs can be and are given to people who’ve committed no offence; imagine that. Your passport is confiscated and you’ve done nothing wrong.

These aren’t the actions of a free and liberal nation. This is the state’s iron heel.

Now no one’s arguing there aren’t hooligans out there but if you plan on policing by consent, as the police always say they want to, you cannot alienate the majority by punishing them for the crimes of a minority. Supporters today should not be punished for the misdemeanours of hooligans from the 1970s and 80s. Police us for what we are now, not how we were then.

Aggressive and regressive policing will only succeed in turning away those from the game who despise hooliganism anyway. The few troublemakers at games merely see it as part of the cat and mouse game they play with the police and their spotters.

Fans are increasingly standing up to the over-zealous treatment they encounter. Whether it’s being harrassed by police on the way to the ground, or stewards inside, people are realising they have a voice.

In the past us fans were often our own worse enemy. We were perfect to target not only because of our actions – which have drastically improved nowadays – but also because of our outlook on life and sporting sectarianism.

Who hasn’t, in their worst moments, scoffed at the treatment of their rival fans? There was, and let’s be honest among many still is, a willingness to laugh at the misfortune of others no matter how serious that might be. Citing individual examples will do no one any favours but I’m sure you can think of some.

However, so many fans have now been on the receiving end of shoddy, and in some cases appalling, treatment that bit by bit the realisation is dawning that enough is enough. If fans stand together and speak with one voice, if there’s a focal point through which to channel our frustration and anger, things can be done. We’ve seen the proof.

Thanks to everyone who came to Sit Down, Shut Up too. Events like this are not only decent crack but can play a part in changing the mindsets of the police and CPS.

Join the FSF today and, if you’d like to help with our policing and stewarding work or have a story you’d like us to hear, email Amanda Jacks.

JOIN THE FSF FOR FREE TODAY AND GET YOUR COPY OF OUR MAGAZINE!