For the last 15 years, Wales fans have been raising good money for local causes whenever they travel away. FSF Cymru tell us more…

Since 2002 Gôl Cymru has been raising monies for good causes and distributing it to orphanages and places of need whenever Wales play an away game throughout Europe and this was again the case during the 2017 visit to Belgrade where Wales played out a 1-1 draw with Serbia.

They had arranged a pre-match party in Belgrade which generated donations of over £1,000 from the fans who attended and this money would be used to help homes for disadvantaged children in Serbia. 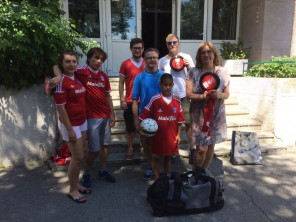 On this occasion Gôl Cymru returned to Dom Moše Pijada for the third time, donating footballs, basketballs, volleyballs, a full set Under-14 Cardiff City kits, toys and the frisbees kindly donated by “Blazing To Serbia.”

In Dom Zmaja, they met up with Ahmet Musliji who was a guest of Gôl in Cardiff for the return fixture last year. He beamed at seeing their representatives, laughing that “Wales still can’t beat Serbia!” The home received similar sporting equipment to Moše Pijada, notably Colwyn Bay FC children’s shirts, as well as a donation of around £200 (27,000 dinars) to rebuild the fountain in the outside relaxation area in the home. As a token of their appreciation, they will get the children to paint the renovated dragon red.

They concluded their activities in Belgrade with a visit to Dom Drinka Pavlovića, where Gôl caught up with carer Danilo Bojović and Milica and Elvis who also came to Wales last year.

They purchased a table tennis table, teddy bears and other sporting equipment for the home. Danilo commented, “It was great to see our Welsh friends again. It’s the first time that fans of an opposition team have done this for us and we greatly appreciate all you’ve done,” as he invited Gôl to join them in a game of Frisbee and Table Tennis.

Once back in Wales we realised that a lot of fans may have some left-over dinars from the trip to Serbia so Corky from the FSF Cymru decided to ask fans would they like to donate it to Gôl Cymru in order that they can return to Belgrade to further help their projects in Belgrade, Gol were happy to agree to this idea but none of us expected the incredible response we got from the Welsh fans.

Fans started sending money through the post to Corky’s home with donations ranging from 100 Dinar (about 80P) up to 7,000 (£50) from some fans, all of whom had changed too much Sterling for Dinars, then realised how cheap the beer was! 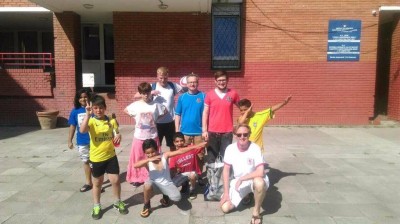 Fair play to loads of them who decided to send it to FSF Cymru to pass on to Gôl Cymru and currently the total stands at an incredible 142,500 Dinar, which is well over £1,000 and the donations are still arriving daily.

Corky said: “Collecting and organising the donations was an easy thing to do and a great pleasure being able to assist Gol Cymru in their fundraising.

“They do great work and hopefully this idea will catch on and maybe Gôl can arrange for fans to send donations from the next two games in Moldova and Georgia, both of whom have closed currencies.”

FSF Cymru run fan Embassies for all Welsh away games and were happy to assist Gôl on this occasion.

The start of the 2021-22 Premier League season has been marred by significant queues outside turnstiles and problems accessing grounds at clubs who have switched to digital-only ticketing.

The good, the bad and the ugly: Away Fans Survey returns

The Away Fans Survey, the largest ongoing study of the away fan experience in England and Wales, is back again and we're after your help once more.

VAR: what is it good for?

You may have seen the Premier League’s recent PR efforts to head off (some would say inevitable) complaints about the debut of VAR this coming season.

The FA Board recently announced “a significant increase in prize money” for the Women’s FA Cup, set to come into effect from the 2022-23 season, with further details to be released.