Supporters will be able to buy “Fan Tokens” from Socios which gives fans the ability to vote on selected “club decisions, earn club rewards and compete for once-in-a-lifetime experiences.”

However, exact details on what decisions will be taken via the platform have not yet been released.

Now a supporters’ coalition at West Ham United has publicly criticised the club’s deal with Socios and launched the “Don’t Pay To Have Your Say” campaign .

“The chance to have a say on the football team that has been amongst our community for almost 125 years. The club you’ve gone up and down the country to support, the club you have given your heart to – very soon you’ll have to pay to vote.

“If we allow this to happen unchallenged it opens another door for the powers to be to fleece us again.” 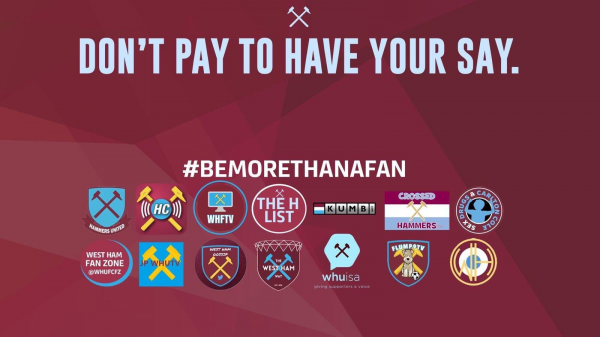 Back in May, the FSA criticised West Ham United’s partnership with Socios – arguing that it undermined the progress made on supporter-club dialogue by attempting to monetise fan engagement.

Since 2016, clubs have been required to meet with their supporters to discuss club matters under Department for Digital, Culture, Media and Sport (DCMS) guidelines. This “structured dialogue” is now in the English Football League (EFL) and Premier League rulebooks.

The FSA’s forerunners, the FSF and Supporters Direct, were part of the Government’s Expert Working Group that created these guidelines on supporter engagement and have been tracking their implementation at clubs across the country.

FSA chief exec Kevin Miles said: “We worked qclosely with the Premier League, FA, EFL and the Department for Digital, Culture, Media and Sport to create a set of recommendations which all league and clubs adopted to greater or lesser extent.

“They included many principles around how clubs and leagues should engage with supporters along open, democratic lines.

“The Socios model runs counter to that as it attempts to monetise fan engagement which the leagues and clubs have committed to doing for free.

“There should be no financial barriers to engaging with your football club.”

West Ham United have ended their deal with Socios.com – a digital platform that uses blockchain to provide paid-for supporter engagement.

UEFA stunned West Ham United fans recently when they banned away fans from attending the next European away game with barely a week’s notice. Here Sue Watson from the West Ham United Independent Supporters’ Association (WHUISA) talks about the disappointment in East London…